Normally, Android devices only have Dual-boot. This is realized with a kernel-mod which means you need an unlocked device to use it. I also saw some projects where you can boot a rom with an update-package through recovery.

However, I wanted to have a Multiboot-solution which works on my defy which has an locked bootloader. You should can install your rom’s as usual inside recovery and you should have a nice menu to select the system you want to boot.

First, I needed to find a way to boot android from file-system images which are located on sdcard. This was the easiest part. Here is an diagram which shows you how it generally works: 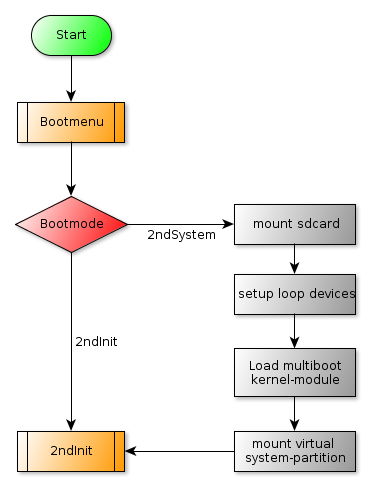 As you can see it just mounts the sdcard and does create and configure loop devices for every partition of the real NAND. After the kernel-module is loaded, all file-access to the original partitions will be redirected to the loop-devices. The last step is to mount the new system partition. In fact, it moves the mount-point of the original system-partition to another location because on defy it’s already in use at this stage.

When this is done, we can continue with normal 2ndInit. For those of you who don’t know, bootmenu is a program on “Motorola Defy” which halts the execution of the init-process and can execute 2ndInit to allow booting a custom rom. It does also provide useful tools like recovery or overclock-settings.

The most work was to fix compatibility with some rom’s which caused problems with some mods. Since version 0.7 Multiboot is fully integrated into Touch bootmenu.